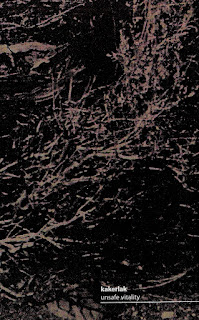 
harsh noise wall is definitely an acquired taste, but once you've picked it up, there's no looking back. it's about as brutal and unrelenting as music can get, but a lot of longer releases by acts like vomir and the rita can be difficult to sit through all at once.

this tape, "unsafe vitality" by kakerlak, is right in that sweet spot - not too short, but not so long that you can't make it through in one sitting.

a c30 released in 2007 by monorail trespassing, "unsafe vitality" is dense, layered walls of harsh noise. there isn't a lot of variety here, but isn't that the point with this kind of music? just sit back and let the violent waves of sound pummel you into submission.

if you're not familiar with kakerlak or monorail trespassing, rectify that immediately. the former has recorded multiple collaborations with the rita and macronympha, amongst others, while the latter has released material by seminal acts such as prurient, âmes sanglantes, werewolf jerusalem, and aaron dilloway, plus many, many more.

monorail trespassing releases are available at many los angeles-area stores including mount analog and vacation vinyl, as well as directly from the label via their website. prices vary but most go for about $7.50 including shipping. they've got a great selection of noise, ambient, and loop manipulation tapes and I highly recommend all of them, even the ones I haven't heard yet - everything is that good.