created as part of "Identity 0.0," curated by Leo Kuelbs and Aaron Riedel

as some of you may know, I've spend spring and summer of this year working on a new commissioned video for a curated show focused on the fluid nature of identity in the 21st century.

the concept was first mentioned to me almost a year ago, and in january of this year I started testing out visual concepts and brainstorming story ideas, but it wasn't until may that the pieces finally started to fall into place. 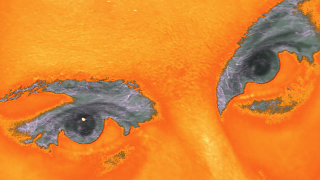 unlike a lot of artists and filmmakers I know, I love have constraints placed upon the work I'm trying to create. those obstacles guide me and force me to think in new ways.

because music is so integral to all of my work (and my daily life in general), I had to find a sound artist who aligned with my aesthetic and could create both ambient atmospherics and crushing power electronics. I've been a massive theologian fan ever since the further I get from your star..., and was thrilled when lee agreed to be a part of this project.

and that's when the concept finally came together.

imagine a world, post-singularity, in which mankind exists in a solely digital state. one machine (played by my lovely girlfriend) is responsible for maintaining those digital lives, and as that machine is flooded with requests for identity changes, it slowly begins to malfunction until it has no choice but to reset itself.

the story is told through written text that was designed and laid out by jorden haley, who also created the sacred geometry-esque patterns that turn and rotate like cogs in an ancient machine.

lee and jorden were (and are) fantastic collaborators, and it was their hard work that took my initial idea and visuals to a new place.

from the outset, it was important to visualize the shift from a physical reality into a digital one. after much trial and error, and a lot of youtube tutorials, I found a method that allowed me transform two-dimensional video footage into three-dimensional particles that could be distorted and manipulated on a z-axis. maintaining particle definition with an h.264 codec was also a little challenging, but a few dozen exports later, I managed to get the settings just right.

on the audio side, I think lee sent me about a dozen different tracks, and I pieced together the final mix myself. the score is currently available to stream and purchase on lee's bandcamp.

to make things even more challenging for myself, I created special versions for the media center's 5760x1080 video wall and 9024x800 360-degree projection. so come on out to the opening reception to check out my work, as well as all of the other videos in the show, then swing by the manhattan bridge to see it again in a different format.

and don't miss ende tymes...really excited and honored to be a part of such a stellar lineup. my video is showing on sunday, but the entire festival is worth checking out.


buy ende tymes tickets for friday, saturday, or sunday...or get a weekend pass. 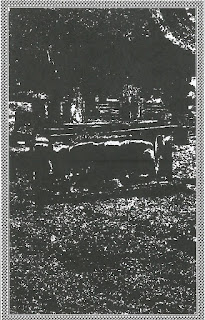 ambient synth-based intro and outro tracks with four slabs of black metal in between.

what more could you want?

a vinyl version might be coming soon, so keep an eye out.


(for funereal purposes only.) 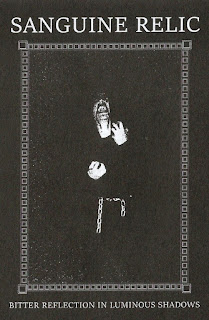 everything released by both the artist and label have been fantastic so far and this is no exception.

sanguine relic have always struck the perfect lo-fi chord, at least for me...harsh and raw, but with unrelenting, memorable riffs that somehow manage to surface despite the grime and decay.

this is exactly what I was hoping for and I'm looking forward to absorbing this as the daylight dissipates and the cold moves in.

long-since sold out on cassette, the vinyl version from skjold disappeared in something like fifteen minutes, as it did every other distro, as well.

keep an eye on discogs, this one comes highly recommended.


(for bitter purposes only.)