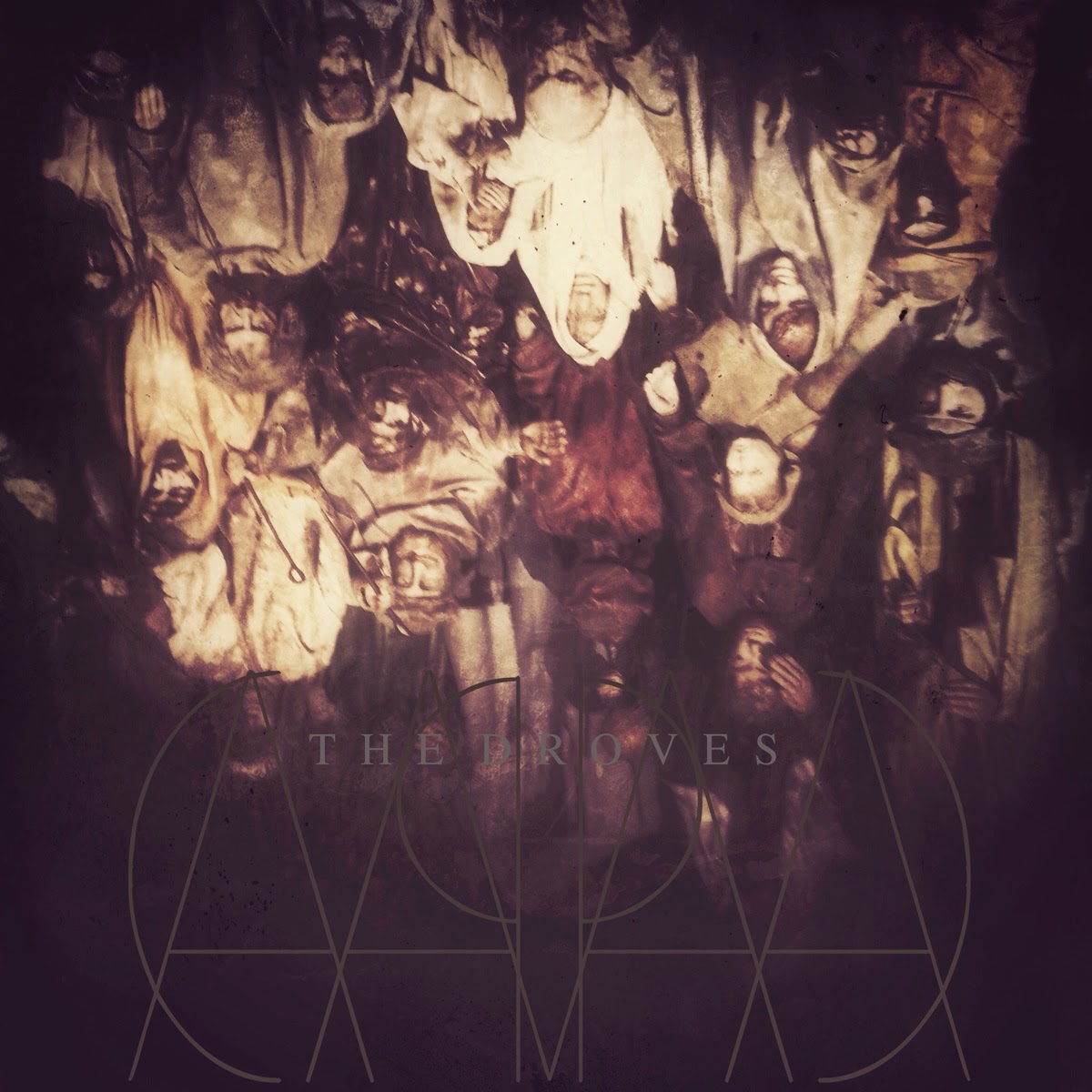 1. Sigh Of The Oppressed Creature
2. Chains And Garlands
3. Cull The Living Flower

as I've said before, band submissions that I actually enjoy are few and far between. although I enjoyed the philadelphia-based CAPA's full-length from last year and fully intended to mention it on here at some point, it slipped through the cracks.

but with previous releases on the stellar ivory antler label and a glowing recommendation from ben over at black metal and brews, I knew it was time to devote some serious attention to them, and their newest recording, the droves, released just a few days ago, is absolutely worthy of that attention and then some.

this EP is tight, focused, and displays a talent for combining disparate musical styles into a cohesive, emotional, and enthralling whole. after a few seconds of ambience, the guitars and drums kick in and the band never looks back.

the production sounds great, the riffs are solid, the vocals are perfect, and the whole thing is just consistently high-quality - definitely one of the best EPs I've heard so far this year and I highly recommend that you all check it out. a vinyl 10" with alternative artwork is in the planning stages, so keep an eye out for it.

and be sure to pick up all of their past releases on bandcamp before paying a visit to their facebook page to stay on top of future plans and releases.


(name your own price on bandcamp.) 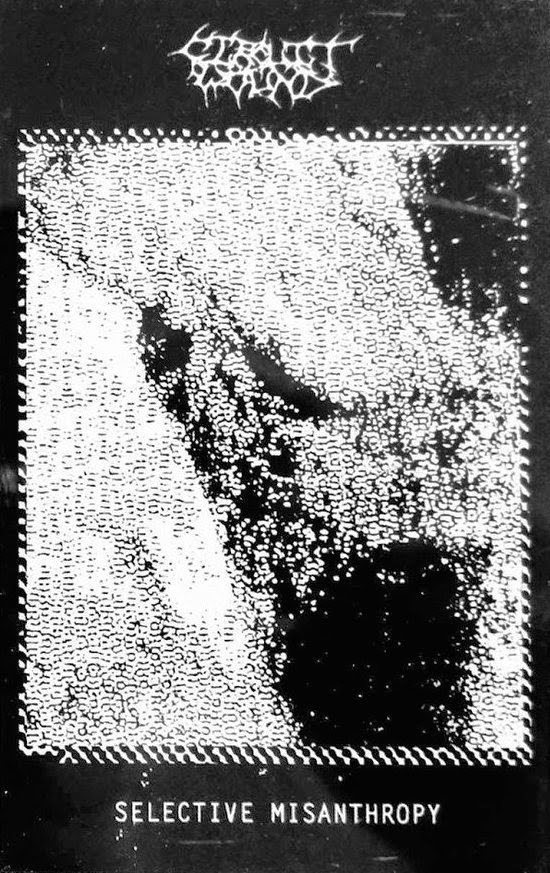 this item was part of a packaged I received a while ago from kevin mceleney, who runs the heavy psych label and also performs under the "constrain" monicker, amongst others.

contained within the tape are nearly forty-two minutes of harsh, chaotic noise.

it's all very varied and destructive and will definitely appeal to the vast majority of you.

that said, go out and support both the label and the artist. jay howard, a.k.a. circuit wound, has released dozens of recordings over more than a decade on labels like monorail trespassing and hospital productions.

a track of his was also featured on field tales.

heavy psych has been putting out material from artists like deathpile, skingraft, the rita, and deterge for the better part of a decade now, so head over to their webstore and grab a couple of new releases, or check out discogs.

these are the kinds of labels and artists that need your support. 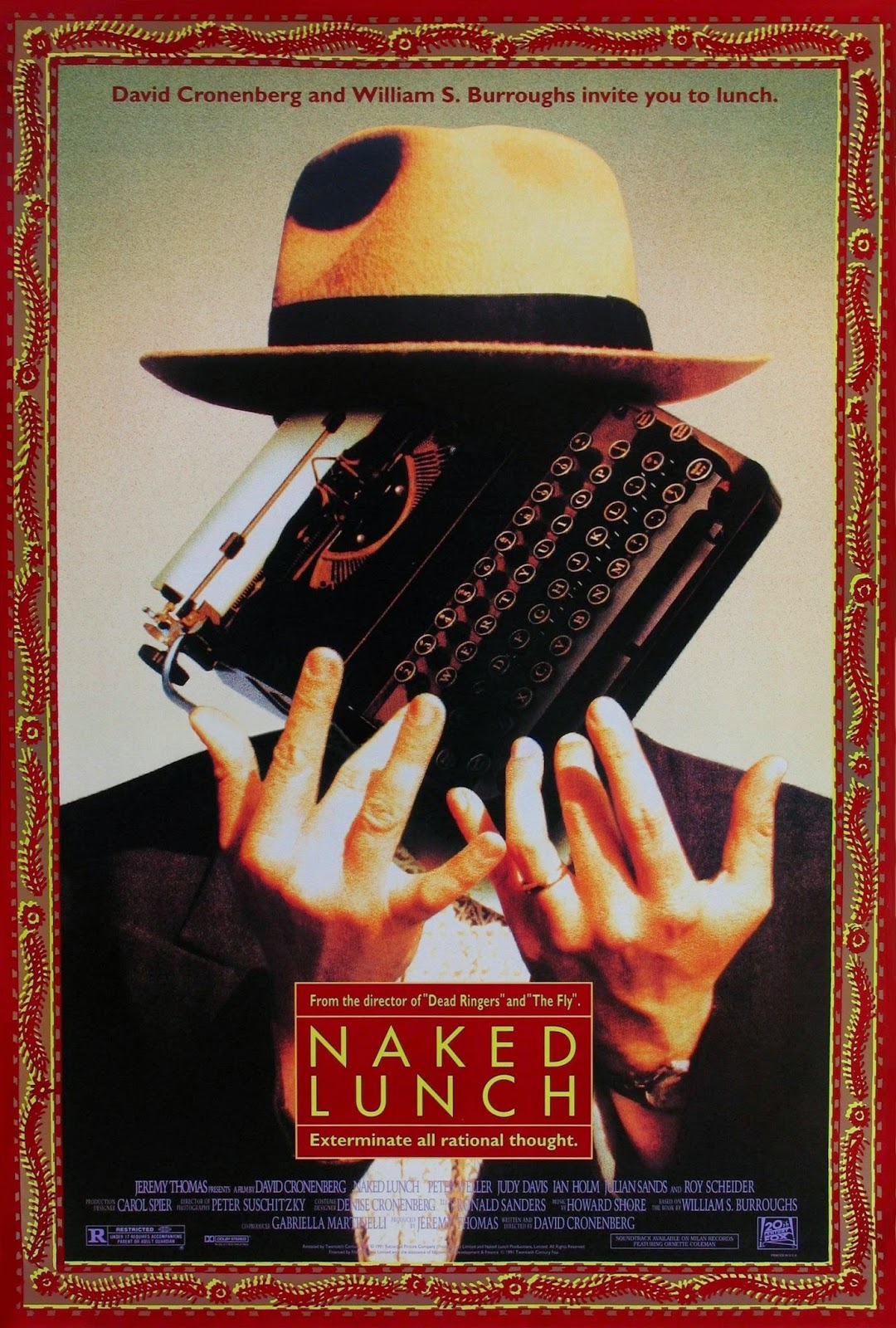 I'm not really sure why I decided to rent naked lunch all those years ago. I had only a passing familiarity with cronenberg's work, knew nothing of william burroughs, and didn't even realize that peter weller had also starred in robocop.

but something about that poster image enticed me, and the film swallowed me completely.

the costume design, the art direction, the creature design, the music - they all combine to form something so surreal, so alien, that's there's genuinely nothing else like it anywhere in cinema. the fact that this was produced by a major studio makes it all even more mind-boggling.

and although cronenberg's film isn't the most faithful adaptation in history, it uses the book as a starting point to explore not only the themes important and inherent to burroughs' work, but the author himself. 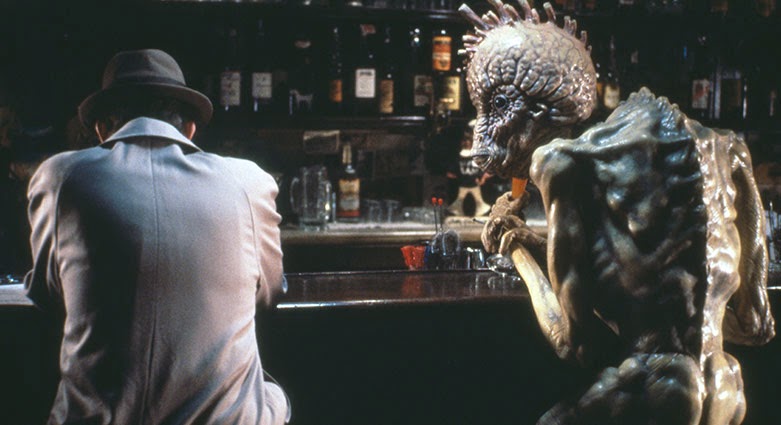 included in the film are many (too many, according to burroughs) allusions and direct references to some of the most crucial events of the author's life.

first and foremost amongst them is the shooting death of his common-law wife, joan, who was shot in the head during a drunken game of william tell. her death by his hand started burroughs down a path from which he'd never return, eventually discovering all of the dark realities of who he really was.

burroughs' misadventures in morocco also feature heavily in the film, as do fictionalized portrayals of jack keruoac and allen ginsberg but none, even the accidental murder, feature as heavily as burroughs' notorious drug use.

cronenberg swapped out the real drugs for fictional drugs - bug powder, ground centipede - and this surreal change actually drives home just how damaging the real substances are on the human body. regardless of the specifics, it's still something unsafe and toxic. 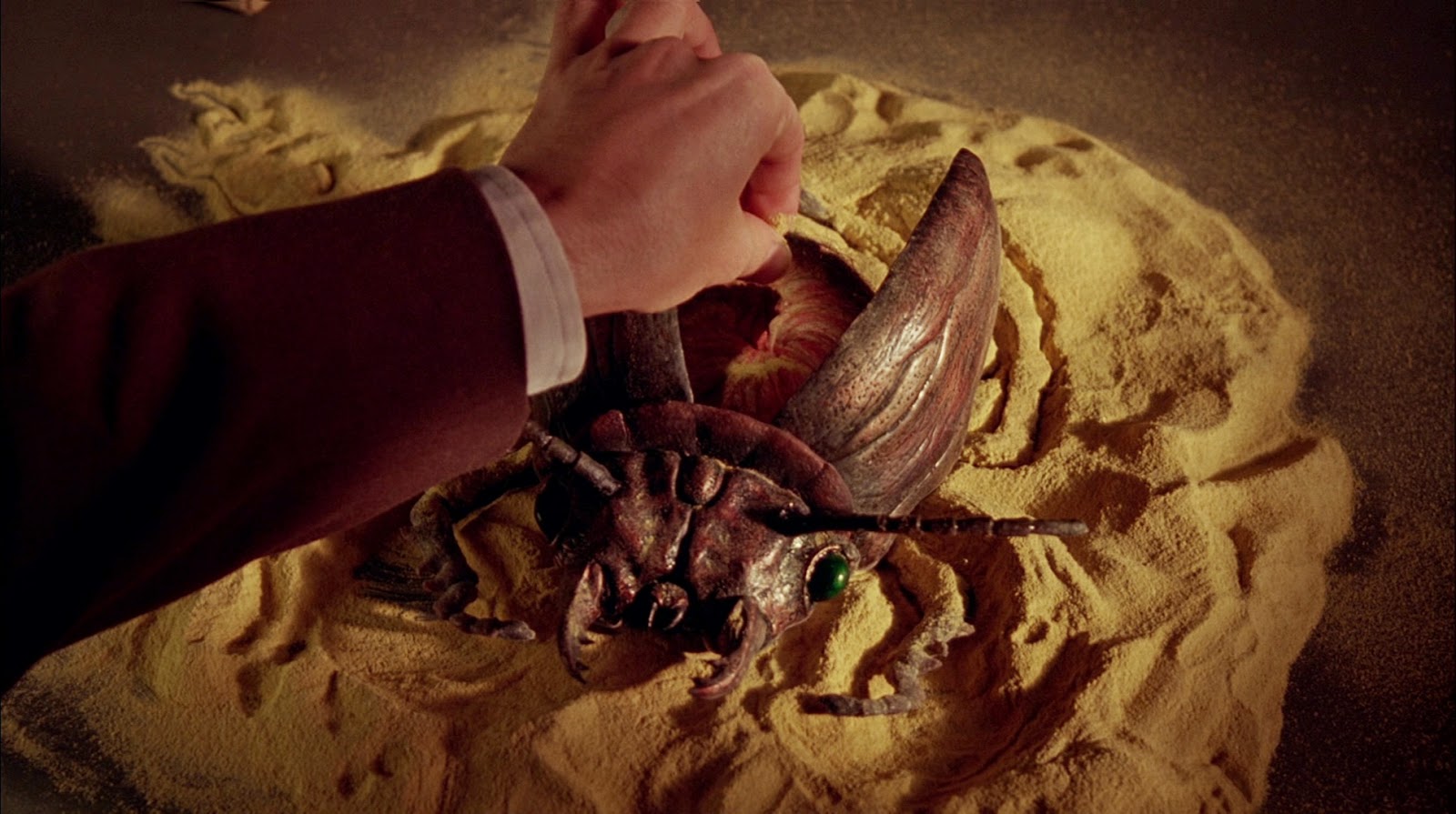 and just like burroughs' life, the drugs are pervasive - essential to the plot and used by everyone around him, they're just a part of life. that's when focalized through burroughs' perspective, at least. at one point, half-way through his latest manuscript, burroughs' likeness emerges from a drug-induced haze to meet with his friends, who are afraid that he's falling down the hole of addiction too quickly for their to be any hope of recovery once his writing is done.

any creative has experienced this in some capacity - when the need to live in that creative mindset takes over, it's easy to forget about almost everything else in life. relationships, personal health, responsibility; they all fall by the wayside.

it's these autobiographical details merged with portions of the novel that really elevate this film and make it a unique entity unto itself. 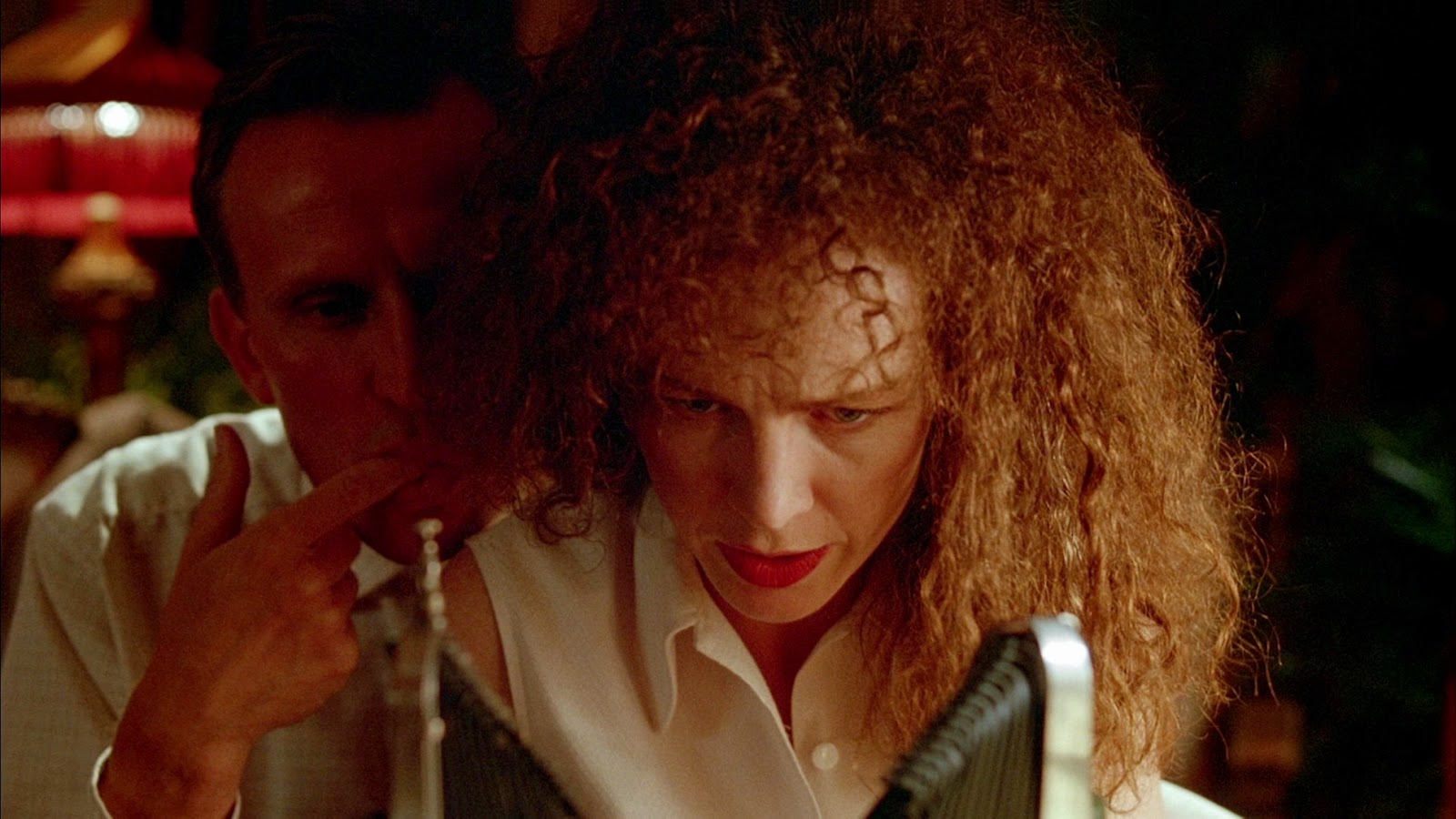 as much as I love this film for its depiction of both the artistic lifestyle and the never-ending drive to create, I also love it for the liberty it takes with the adaptation. too many adaptations from the beginning of cinema up until the present day have focused on nothing but bringing the source material to life exactly as it was written, dedicated to preserving the author's vision.

but naked lunch merely uses the source material as a jumping-off point to explore the themes most important to the author while creating a narrative that is not beholden to the author's original work.

thankfully, this is becoming much more of a trend in the modern television world - say what you will about shows like under the dome, true blood, and game of thrones, but they're taking increasing liberties with the source material to create something that's thematically linked but altogether different in story and characterization.

I think this is incredibly advantageous to film and television creators, as it lets them take a story with established themes and a built-in fanbase and gives them the liberty to explore new themes and new ideas that may not have been in the public (or personal) consciousness when the works were originally created. 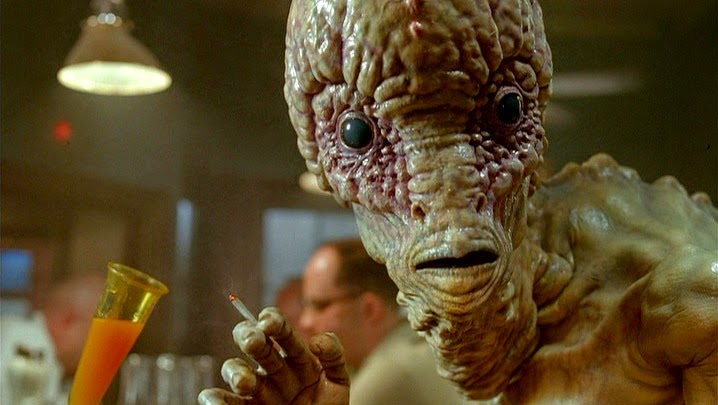 I've always felt that books should remain books, that comics should remain comics, and that any other works should remain in the medium for which they were created. but brilliant works like naked lunch have made me rethink the possibilities of adaptations. for too long adaptations have been beholden to not only the original works, but their fanbases as well.

art and creativity are more collaborative than ever and we've finally reached a time when an adaptation can be something so much more than just fan service, more than just a tie-in, more than a desperate cash-grab.

an adaptation can start with one work of art and result in an entirely new work of art that speaks to different people and in different ways than the original artist could have ever anticipated.


(buy a copy of criterion's edition of naked lunch.) 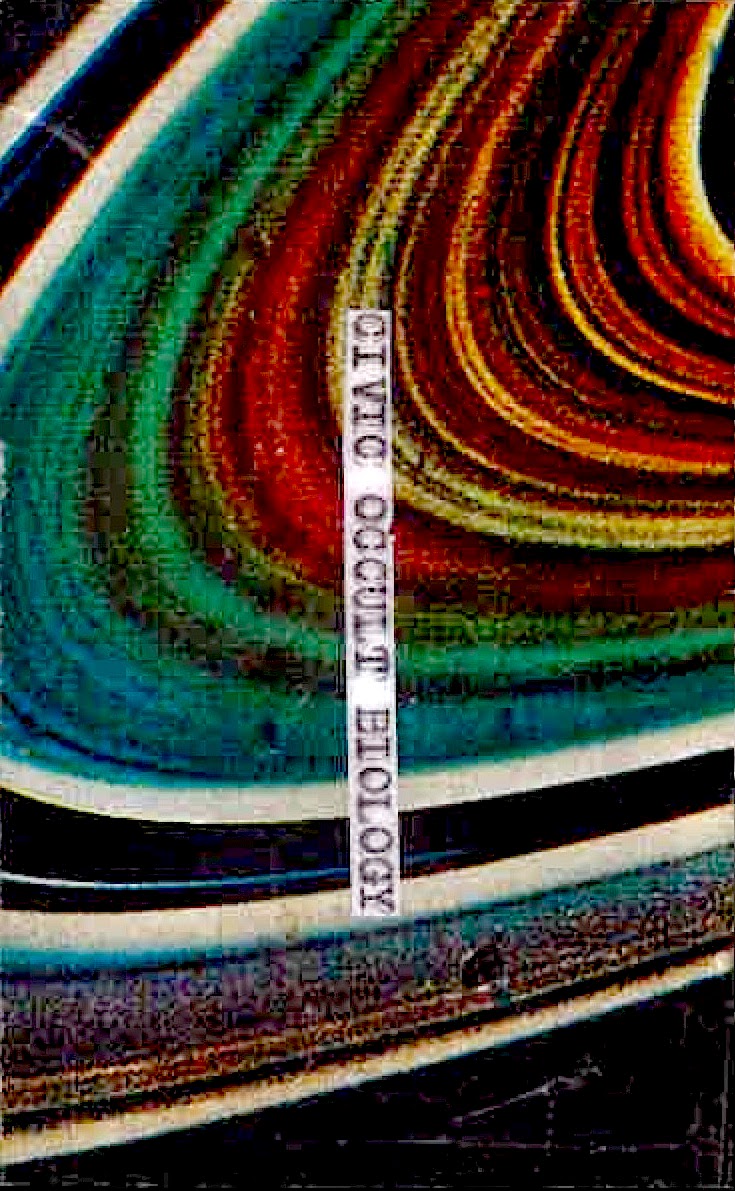 p.m. tremblay of akitsa (and many others) served as the DJ for the evening (best between-set songs I've ever heard, by the way) of sounds that ranged from warm and soothing to as harsh and chaotic as it gets.

every set was great, but prurient had a lot to live up to after his performance at saint vitus a few months ago. but I knew he wouldn't disappoint - he tore through a half-hour of material in as brutal and beautiful a manner as one can.

it was a great night of music at a venue my girlfriend and I hadn't been to previously - a welcome change of pace from seeing almost all shows at either saint vitus or the acheron. I love those venues, but sometimes it's good to mix things up.

anyway, I was on a mission to grab a copy of this compilation and that I did. the artists roster isn't quite as varied as I had hoped, but the material here is, as always, excellent and it ends on a very ambient, experimental note with fernow's exploring jezebel track.

I'm not sure when, where, or even if this will be available elsewhere, so do what you can to track it down...although it will probably be available at the next couple of shows, as will another new compilation, a new exploring jezebel release, and two new geography of hell tapes...so yeah, I'm a little jealous of those of you in chicago and grand rapids....so if someone out there wants to grab me any of those, it would be much appreciated. 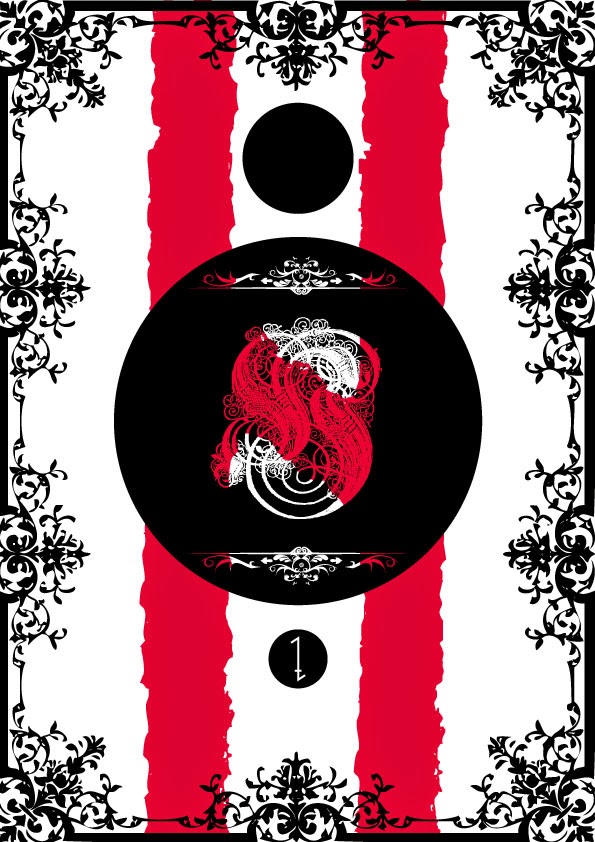 and this release is no different.

colored, translucent paper with black printing, inserts, black bags - this one has it all. if you've ever seen (or handled) any other zeitgeists releases, you know what to expect. they've put out material from greats like sutekh hexen, tollund men, and natural assembly, as well as a handful of lesser-known but equally intriguing artists.

the music here is filled with blistering riffs, hateful shrieks, and frenetic noise - an essential listen for any fans of this blog or raw black metal in general.

there are only a few copies so left, so grab one quickly. shipping to the united states from holland isn't cheap, but until die song's store goes up, we'll all have to make do.

and the great music inside this gorgeous, hand-crafted packaging is worth it.


(buy a copy from zeitgeists publishing.)

culver - vampires of the third reich. 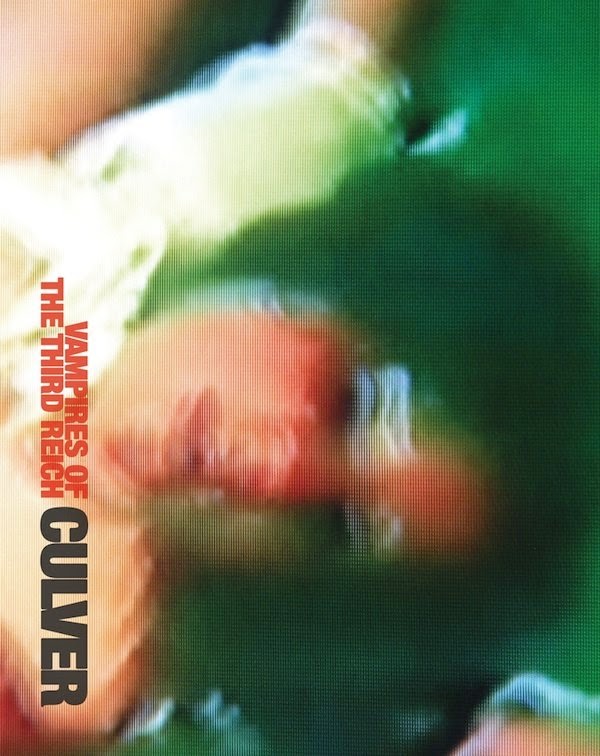 Culver - Vampires Of The Third Reich

with at least ten recordings already released this year, culver, a.k.a. lee stokoe, has been incredibly busy crafting some of the finest, most evocative drone around. while this triple cassette package from blow the reactors may not be his most lengthy release of the year (that honor goes to plague hand), this is almost certainly the most handsome and well-crafted.

packaged in a tall white clamshell case with full-color artwork, inserts, and tape labels, this is one of the most visually appealing cassette releases I've seen in a long time, and my hat goes off to the label for putting together such truly fantastic packaging that lends a ton of character to the music within.

the sonic textures on these three tapes range from haunting to calming, never failing to provide detailed, nuanced soundscapes regardless of overall mood. there's so much incredible texture here that the entire release practically demands to be listened to over a good pair of headphones.

it's harsh, it's soothing, and it's definitely one of my favorite releases of the year from both a sound and presentation perspective. don't hesitate.

(buy a copy from blow the reactors.)