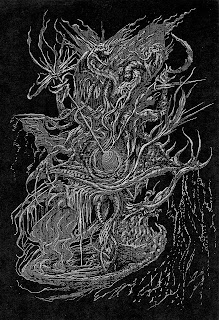 
after putting out a stellar full-length two years ago, ill omen have returned in 2013 with a pair of releases. the first, according to metal archives, is an EP, while the other is a demo. this is the demo - the shorter of the two - consisting of one epic track contained within equally epic packaging.

released by ceremonial oath, the label responsible for the cassette version of aosoth's "III", this lone track arrives on a translucent red cassette with on-body print housed in a clear, oversized case with lyrics and an insert. all of the artwork is gorgeous and fits the mood of the music perfectly.

and that music is black with some doom and death influences that all meld together into a seamless whole. it starts off low and slow before kicking into high gear a little after the three-minute mark. cavernous, raspy vocals backed by up-tempo riffs and drumming propel the track forward until a brief interlude around the eight-minute mark where the guitar comes to the forefront. after a few minutes everything comes crashing back in, barreling through the last couple minutes all the way to the end.

one track running fourteen minutes may seem to some like a tough pill to swallow, but this track moves so fluidly - it's packed with varied dynamics, tones, and passages - that it all flies by in a heartbeat. then you flip it over and press play again. and again. and again.

the always-excellent fallen empire still has copies in stock - mine arrived within days of purchasing. I believe the label also some copies left but their webstore is undergoing some maintenance now and has been for a while, so it looks like fallen empire is your best bet for now. but aren't they always?

do yourselves a favor and pick this one up. it's worthy of your dollars in every way - great music and great packaging, and you're supporting independent artists and labels, too. so grab one now.


(buy a copy from fallen empire.)