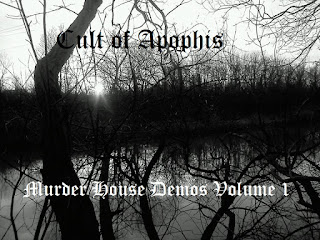 
I'll be honest, most of the demo submissions I receive will never get posted here.  the majority are terrible. others are good but just not in line with what I like to post. so when I get a demo that I enjoy and that fits in with the rest of this blog, it always puts a smile on my face.

but by nature I'm always very skeptical. life has taught me to trust no one and to expect the worst in pretty much every situation. when I received an email from ian, bassist for cult of apophis, with a link to their bandcamp and facebook pages, I wasn't expecting much. but seeing that the demo was short, I figured I'd give it a shot.

and am I ever glad I did.

like the previous band submission that I featured, cult of apophis are a new band on the scene, having formed early this year in michigan. they've only played five shows so far and released this demo less than two months after forming. I've gotta say, I'm pretty blown away. 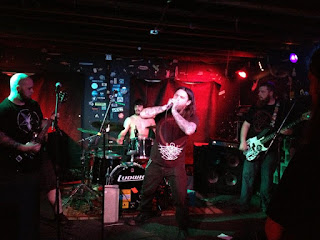 "murder house demos, volume one" is a bubbling cauldron of black metal and doom metal that achieves the ever-elusive perfect mix of brutality, melody, and atmosphere that so many bands strive for but never reach. these three tracks run a little more than eleven minutes and everything is so solid that I've listened to it three times in a row without flinching and just cued it up for a forth.

it isn't totally groundbreaking but I'll be damned if it isn't great. and best of all, it shows incredible promise. there's no standout track - they all compliment each other perfectly - and when it's over, you're eager to hear more. I've been told that they have a second demo on the way, one track of which can be heard here. they're currently unsigned but I'm sure that'll change in the near future.

give cult of apophis and their inaugural demo a shot - no fan of this blog will be disappointed. and stay tuned to their facebook page for more info on shows, the next demo, and all future developments.