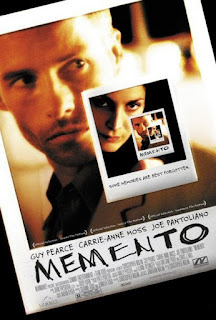 like most formative experiences, I remember the first time I saw memento like the back of my hand. it was late summer/early fall of 2001, I was a senior in high school, and after a lifetime of simply loving and being entertained by movies, I was finally starting to look at them as works of art. I had recently become friends with several people who took film incredibly seriously, some of whom even had career aspirations in the field, and memento was heavily recommended. my family and I traveled to the abomination known as new roc city. they went to see one film while I went to see memento, and I'm pretty sure I was the only one in the theater.

after those two hours were up, I left the theater and rejoined my family outside, and my perception of what a film could be and how it could function was forever changed.

as with all of the "formative film" posts to come, I will not be providing a detailed plot summary, nor will I make any attempt to avoid spoilers. these films are all at least ten years old, and if you haven't seen them by now, well, I feel sorry for you.

while the plot device that drives the film forward could be viewed as a mere gimmick, it's really anything but. christopher nolan's narrative structure and character development both rely on it to constantly shift the viewer's expectations moment to moment.

but even after all of the narrative and structural tricks are pushed aside, we're stil left with one astoundingly creative and, I'd argue, revolutionary choice: the protagonist and the antagonist are the same person.

nolan's choice to give his main character no ability to form long-term memories lets him play with the very notion inherent to all films that there is a good force fighting against an evil force. throughout the entire film, leonard shelby believes he is doing good by pursuing a force that he believes to be evil only for the final sequence to reveal that he's been chasing himself all along.

leonard is the man who (albeit accidentally) murdered his own wife, leonard is the one who gives himself an endless series of mysteries to solve, and nolan's choices in crafting this character are what truly make the film so memorable (no pun intended). this is a man so complex, so conflicted, that he can't even understand himself, nor does he want. he seeks nothing but the gratification of what he believes his purpose in life to be and can't (or won't) comprehend the repercussions.

in terms of production, memento is startlingly simple, almost deceptively so. there are only three significant characters and a handful of locations which, in terms of production, is about as bare-bones as a narrative feature can be. but the way those characters are slowly revealed, the way they gradually change thanks to the narrative's structure, that's nothing less than absolute mastery of the craft of storytelling.

leonard's transition from flawed hero to disturbed murderer, natalie's move from wounded lover to vengeful manipulator, teddy's change from potential suspect to tragic enabler, it's all mind-blowingly complex but presented with such a confident grace that we never once question anything.

ultimately, the film is about the lies we tell ourselves in order to survive each and every day. it's about the quest for something that gives us purpose, and about how we desperately fool ourselves into believing our own rhetoric. but at the end of the day, we're our own worst enemies. we're the ones who determine the paths we choose and whether or not our actions keep us on those paths.

and if it comes down to choosing to see the truth of who we are or retreating into our own cycle of lies, we run scared back into our own heads. because there, just like leonard, we are the heros of our own stories. we are the ones avenging others, helping the ones we love, triumphing over the hardships of life.

coming face to face with those truths can indeed be terrifying, but based on the conclusion of the film, I'd say nolan's ultimate message is that refusing to change and enacting those same destructive, deceptive cycles over and over again is far more terrifying from a philosophical standpoint than any acknowledgment of truth ever could be.

only by acknowledging the truth about ourselves can we move forward, otherwise we, just like leonard, will be trapped in a self-imposed loop that may help us feel heroic. in reality, however, we're just destroying ourselves and those around us through hollow, selfish actions.

so take a look at your own life. even if you don't like what you see, you'll be better off for coming face to face with the truth than you could ever be living inside of your own comforting delusions.


(buy a copy of the special edition dvd on amazon.)