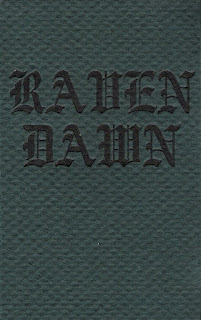 universal consciousness has been putting out great tapes for a while now, but for some reason I had never picked one up...until now. they've recently released material by lord time and wrath of the weak, and their back catalogue includes music by harassor and moonknight, among others.

the new material by lord time and wrath of the weak is excellent, as is this ravendawn tape, although it's a very different beast. this isn't a new album at all, but a remastering of their first and only demo recording from 1997. and although it sounds better, you can still tell right from the get-go that this is lo-fi, no-budget black metal. but that doesn't mean it isn't worth your time - quite the contrary. there are plenty of blast beats, shrieking vocals, and barely-melodic riffs to draw you in and hold your attention throughout the nearly twenty-two minute length.

each universal consciousness cassette includes a pro-pressed tape and a card stock, letter-pressed j-card in a standard (sometimes colored) case, sealed with a sticker. the packaging is top-notch and makes for an instantly recognizable style - you'll never mistake a universal consciousness release for anything but. copies of this one are no longer available directly from the label, but those of you in los angeles should check out amoeba and vacation vinyl - they'll probably have a couple in stock. side b of this ravendawn tape includes the original mix from 1997, so if you want to hear that, you'll have to buy one.

oh yeah, it's also available from fallen empire...but what isn't these days? just click on the link below and select it via the drop-down menu - only $5.50 plus shipping.

(buy a copy from fallen empire.)