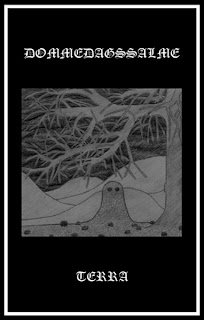 
please allow me to apologize once more for the lack of posts recently. at first it was because of our cross-country move. but then only two weeks after getting back, I got a new job...definitely didn't think it would be that fast.

anyway, said job is extremely time-consuming, strenuous, and stressful, especially with two large events on the horizon. paired with a three-hour commute, I've had little energy to devote to music at all, let alone ripping, listening, and writing. and that doesn't even touch the longer film-related pieces. the material is there, I just have to get to it...and I will. once the job settles down and we move into our new apartment, I'll not only have more time but more energy as well.

and that (fingers crossed) should be no more than two weeks away.

dommedagssalme is a perennial favorite here and one listen to any of john marshall's releases should tell you why. his simultaneously conventional yet fresh approach to black metal just sounds great - little hints of melody, epically tormented vocals, and great arrangements all combine to bring a new sound to what is otherwise a very traditional formula.

his work on terra, a demo released in 2008 via legion blotan, brings a slightly different sound and production value than was heard on the more recent tape that I last posted. the mix is drastically different, with the guitars (and synths?) right up front, then the vocals, then the drums that seem to be buried particularly deep.

the resulting sound bears a striking resemblance to drone and *gasp* shoegaze. but this is still black metal at heart, with plenty of fuzzed-out riffs, furious drum parts, and tortured vocals. copies are available via legion blotan at the link below - just scroll down a little, everything's in alphabetical order.

(buy a copy from legion blotan.) 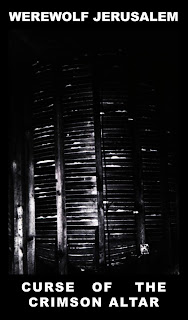 I've been waiting so long to post this one, and I'm glad the time has finally come.

this massive triple cassette box set comes courtesy of the one and only total black, and the sound contained within is so much more harsh and unforgiving than the previous werewolf jerusalem release I posted that it's almost staggering.

these three cassettes come in a vinyl clamshell case with an insert. the stark black and white imagery is a perfect compliment to the HNW contained within. as I stated above, this is an hour and a half of some of the most brutal and unforgiving noise I've heard in a while, and it absolutely demands to be listened to on a great pair of headphones.

each track has a completely different mood and tone than the last which, let's be honest, isn't frequently the case with harsh noise wall. some tracks are incredibly dense, others are much more sparse. but regardless of the specific track, there's an omnipresent sense of doom, despair, and darkness. a feeling of foreboding, that danger is closing in. it's that very aura that makes me both love and fear this album, and also why I keep returning to it over and over again.

so do yourself a favor - first, buy a copy from brett at total black. then pop the first tape into your deck, put on a good pair of headphones, kill all of the lights, and press play. you'll be pulled into an almost psychedelic world of sonic distortion and destruction from which you will not emerge unscathed.

if this isn't one of the best harsh noise releases of the year, I don't know what is. 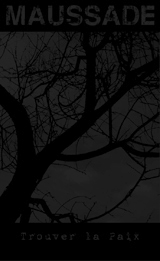 
my third release from NSN, maussade's trouver la paix ((tr: "to find peace") is another slab of epic harsh noise wall, right along the lines of en dehors, en rien.

it's nearly thirty minutes of dense, heavily textured noise. listening to this over headphones reveals a lot of layers here, almost too many to process, but in the end it's a great release. on a slight tangent, now that I'm back in new york city (and working, I might add), I've been listening to everything on headphones much more frequently. maybe it's because I'm so drained from my much more busy schedule, but harsh noise wall has taken on a much more psychedelic quality, inducing what might be auditory hallucinations. I hear little details, melodies, and voices that are probably not there, instead invented by my brain based on the influx of disparate sounds these recordings provide.

needless to say, be sure to listen to this and any other harsh noise wall recordings via headphones whenever possible.

moving on...my only complaint, and it's not with the album or artist at all, is that NSN's releases are just too hard to find. criminally hard to find, in fact, and if it wasn't for total black's small but excellent distro selection, I wouldn't have heard two of the three that I've posted here.

regardless, always be on the lookout for anything from this stellar label. two are available via discogs, so do what you can to support them until mailorder resumes. 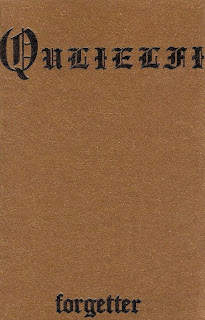 1. The Black Earth Will Hide You
2. Hekas Hekas Este Bebeloi (Phibionite Orthodoxy)
3. The Bees Are In My Head
4. Plain Of Aletheia Plain Of Truth
5. Where There Are Men There Are Devils
6. Elemental Energies Of An Extremely Hostile Type
7. The Lost Kala


this one definitely caught me by surprise. a relatively new release from universal consciousness, "forgetter," the debut recording from qulielfi, is an interesting beast - a partially electric, partially acoustic black metal album.

and I don't mean acoustic interludes or passages, I mean tracks of almost full-on acoustic black metal. there are a few electrified riffs buried under the static, but the overall sound is pervasive, otherworldly, and strangely enthralling.

there's a very tribal quality to the drums as well that give the entire album a very hypnotic feel - it quickly lulls you into a trance and before you know it, the tape is over. and I mean that in a very positive way - it's something that I immediately wanted to return to and investigate further.

the sound is so familiar yet so alien. I'm sure there are other acoustic-oriented black metal bands out there, and maybe I've even heard some of them, but "forgetter" made me "forget" all about them (pun very much intended).

as with all universal consciousness releases, this one is gorgeous to behold. copies come with either a gold or purple cover, with the artist and title both letter-pressed on. the tape is clear with on-body print and clearly labeled sides. all in all, it's a real class act.

I believe copies are still available through the label so be sure to grab one. and while you're at it, pick up whatever releases you might be missing. universal consciousness has yet to disappoint.

(buy a copy from universal consciousness.)

werewolf jerusalem - hand of the gallows. 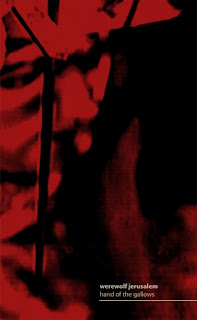 Werewolf Jerusalem - Hand Of The Gallows

1. The Door With Seven Locks
2. Death Drums Along The Rivers

with four new releases, monorail trespassing remains one of the strongest noise and avant-garde labels in the game. excellent packaging, quality tapes, and artists ranging from veterans to newcomers all combine to make for a very strong label.

this release is by noise veteran werewolf jerusalem, also known as richard ramirez. while I haven't posted any of his work under this moniker yet, I have posted some of his work as black leather jesus and an innocent young throat-cutter. any fans of ramirez's previous work as werewolf jerusalem will be familiar with the style of this tape - droning, minimalist static. it's not quite harsh noise wall, but it's close; there's a little more variation to the noise here than, say, works by vomir or the rita.

it's a little more ambient than the other werewolf jerusalem recordings I've heard and thus would make great background music for whatever you might be doing.

I don't think it's available on the monorail trespassing site just yet, but it should be soon. if you're desperate for one now, though, get in touch with ramirez himself and he might be able to send you a copy.

and don't forget to check out the man's bandcamp page - it's filled with recordings spanning many years and many different projects, and there are hours upon hours of material to keep your ears occupied.

(buy a copy from monorail trespassing.)