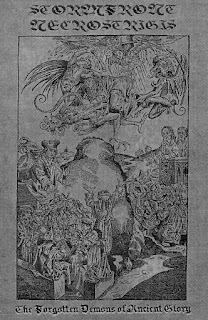 and now we return to our regularly scheduled programming with the cassette version of "the forgotten demons of ancient glory," a split from stormfront and necrostrigis, released on tour de garde in late 2012.

I had never heard of either band before this one, but the cover art and tour de garde label were great indicators of both the quality and style within. this is some old-school black metal with a primitive sound but surprisingly good recording quality. honestly, both bands sound very similar, but not in a bad way - they're both solid, with great riffs, high-pitched shrieks, and blast beats aplenty.

stormfront has been around for almost twenty years and only released a handful of recordings, while necrostrigis has only been around for three years but has released more than a dozen recordings. if you're a fan of the old-school sound (and who isn't?), definitely seek out whatever other material from these artists you can find. as usual, discogs is your best bet.

for a copy of this tape, swing by the fallen empire distro and grab one now. it comes with a nice j-card and a pro-printed tape - definitely a quality package, as is to be expected from a tour de garde release.

and while you're over at fallen empire, buy a copy of "alleviation prayer," the inaugural svn okklt release, by herukrat. it's fantastic.

(buy a copy from fallen empire.)