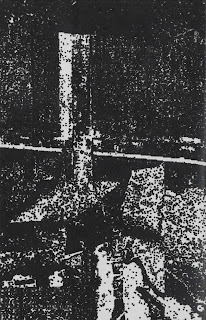 the funeral altar side sounds great, as expected...these tracks really build on what was started in the full-length and they're first-rate.

as stated when it went on sale, the ghaisiuan side was recorded on a broken machine and sounds rough...not that I have an inherent problem with that.

in fact, I think it's an interesting experiment in sound...it adds an almost generative element, where even the artist doesn't know how the final outcome will sound until it's finished.

the resulting track is very noisy, very raw...it sounds like the guitar and some vocal elements are present, but everything else is in the process of being engulfed by a black hole...probably not what most of you were hoping for, but it adds a new layer to this release, which would've otherwise just been a standard (albeit excellent) split...it makes it into experimental sound art, a generative exercise in unintended manipulations...to my ears, at least.

definitely check it out.


(for split purposes only.) 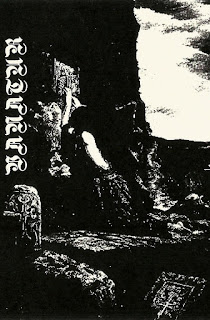 
hot off the presses from the latest perverse homage update, here's the debut (as far as I can tell) from armenian black metal horde vanatur.

only two tracks, but they're substantial and really great.

plenty of riffs, ghostly shrieks, and a surprisingly audible recording make for a really excellent release.