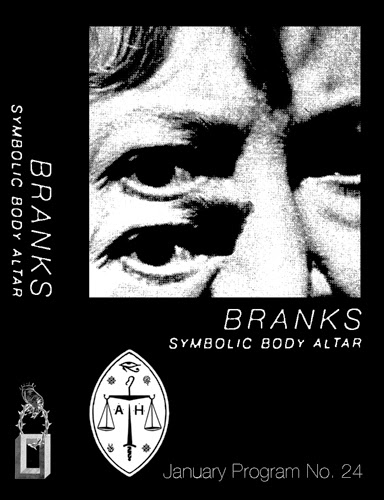 definitely one of the more sonically violent tapes in the january program, this debut recording from branks is kind of a cross between rhythmic techno and power electronics - each track generally starts with a beat before the aural torture begins, with harsh vocals and wild noise quickly suffocating all else.

it's an interesting recording and shows a lot of promise. I wish there was more to say, but I haven't been able to find any info about the artist(s) anywhere else online.

this tape was part twenty-four of the january program. it's sold out from ascetic house, but copies are currently available (for now) from mount analog in los angeles. 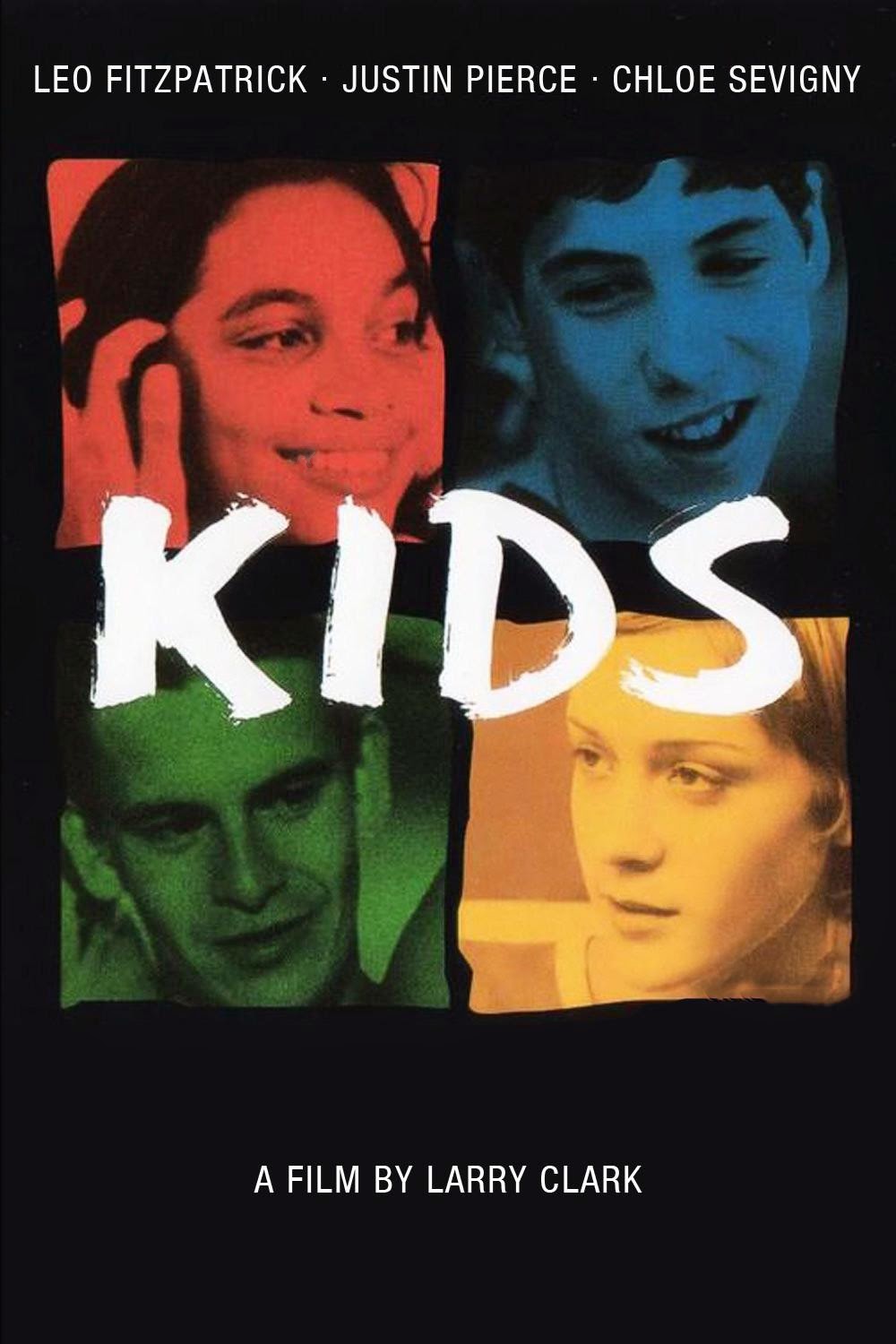 as anyone old enough will remember, kids caused quite the controversy when it was first released. but as harsh as it may have seemed, it was a genuine, honest portrayal of the lives of young people in new york city. and don't get me wrong - I'm in no way condoning the activities that occur within the film, but to say that they don't happen or that this is an exaggeration would be naive.

it also introduced the world to harmony korine, a man to whom I am deeply indebted...but that's another story for another time.

this film will always be, first and foremost, one of favorite cinematic depictions of life in new york city. even at just thirteen years old, kids made me want to live there, to be a part of the craziness of that great city I'd end up calling home just a few years later. I certainly didn't engage in any of the behaviors detailed in the film, nor did I even understand most of them at that age, but that sense of freedom, that ability to just go anywhere and do anything, it still sticks with me to this very day. 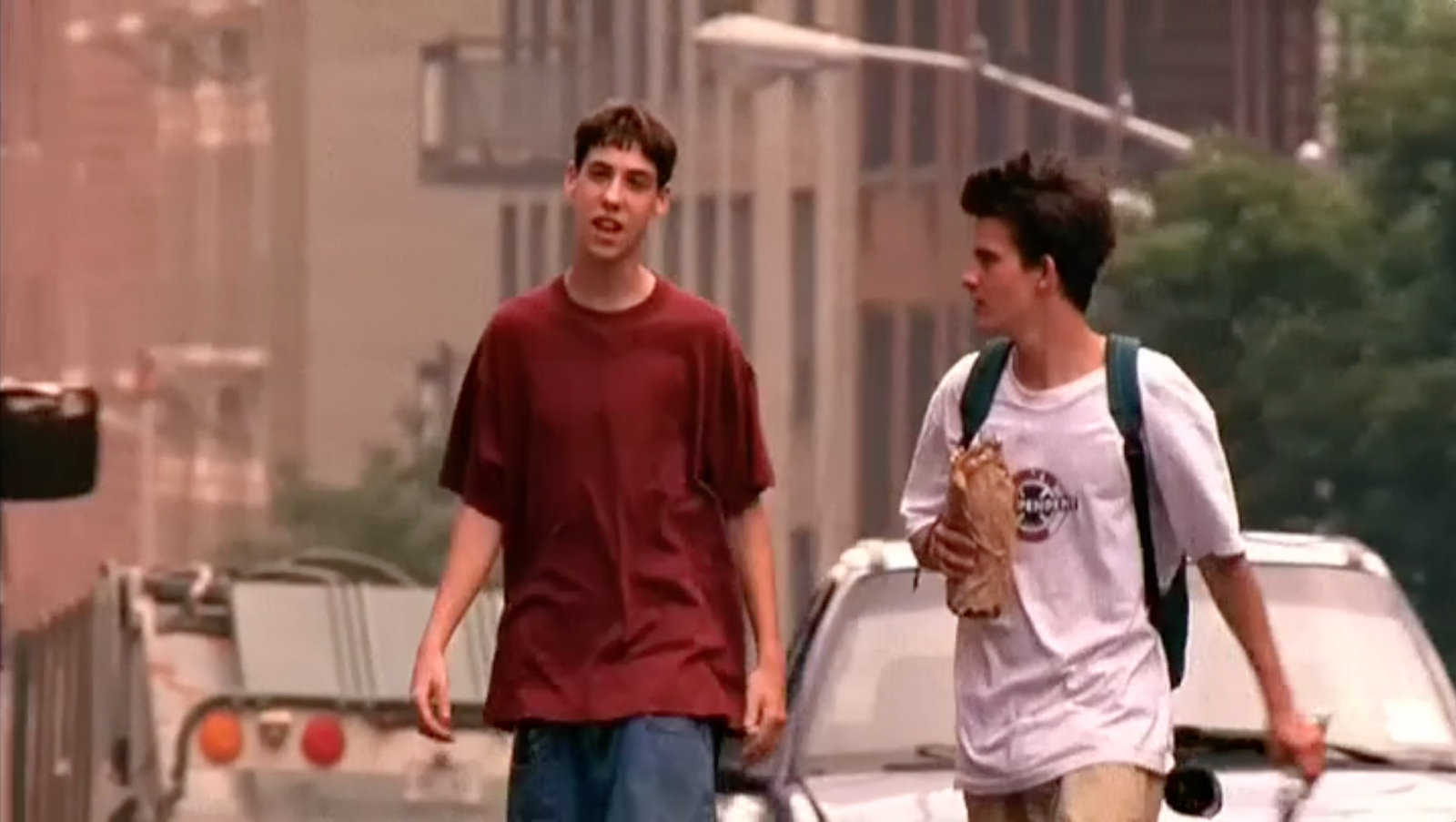 upon seeing it for the first time, it's easy to mistake kids for a documentary. the camera work is utilitarian, the dialogue is naturalistic, and the kids themselves are, for the most part, non-actors. the whole film feels so gritty, so real, that you quickly forget there's a script.

it also gave birth to many success stories - chloe sevigny and rosario dawson made their debuts here, and leo fitzpatrick is still acting as well, having recently appeared in cold comes the night with bryan cranston. unfortunately, it also paved the way to tragedy - justin pierce died in 2000 and harold hunter passed in 2006. 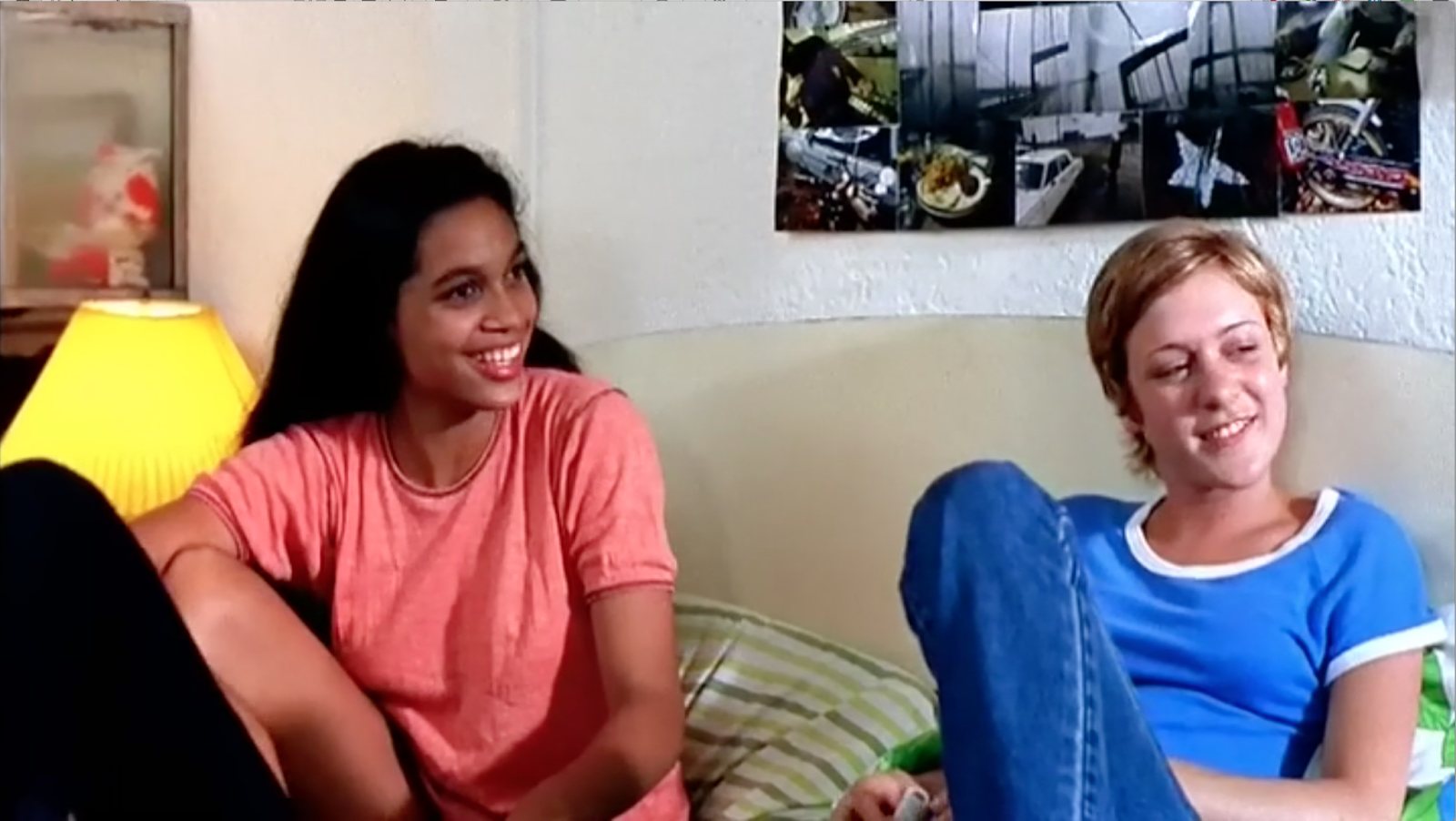 harmony and larry clark did collaborate a second time on the near-impossible to find ken park. while kids was imbued with some semblance of morality, ken park was nothing but exploitation, and not even well-made exploitation, at that. as a result, it never received distribution in america. rips are available online, but honestly, it's a film that's best left alone...and that's coming from someone who actively seeks out offensive and controversial works of art.

and despite the controversy that kids caused upon release, it's nonetheless an important film - not just for the time and place it depicts within the narrative, but for the implications and themes that it represents. the kids themselves are completely and utterly carefree, reveling in the irresponsible nature that's inherent in youth culture. they steal, they take drugs, they have sex, they fight, they stay out all night - nothing matters and nothing can interfere.

that is, nothing they've experienced at this point in their short lives - but what about all of those harsh realities that much of the rest of the world deals with on a daily basis? although we never get to see the real repercussions of the events detailed in the film, the catalysts are all there and it's safe to assume that the titular kids will never be the same once an unstoppable, unknowable disease has ravaged not only their bodies but culture as well. 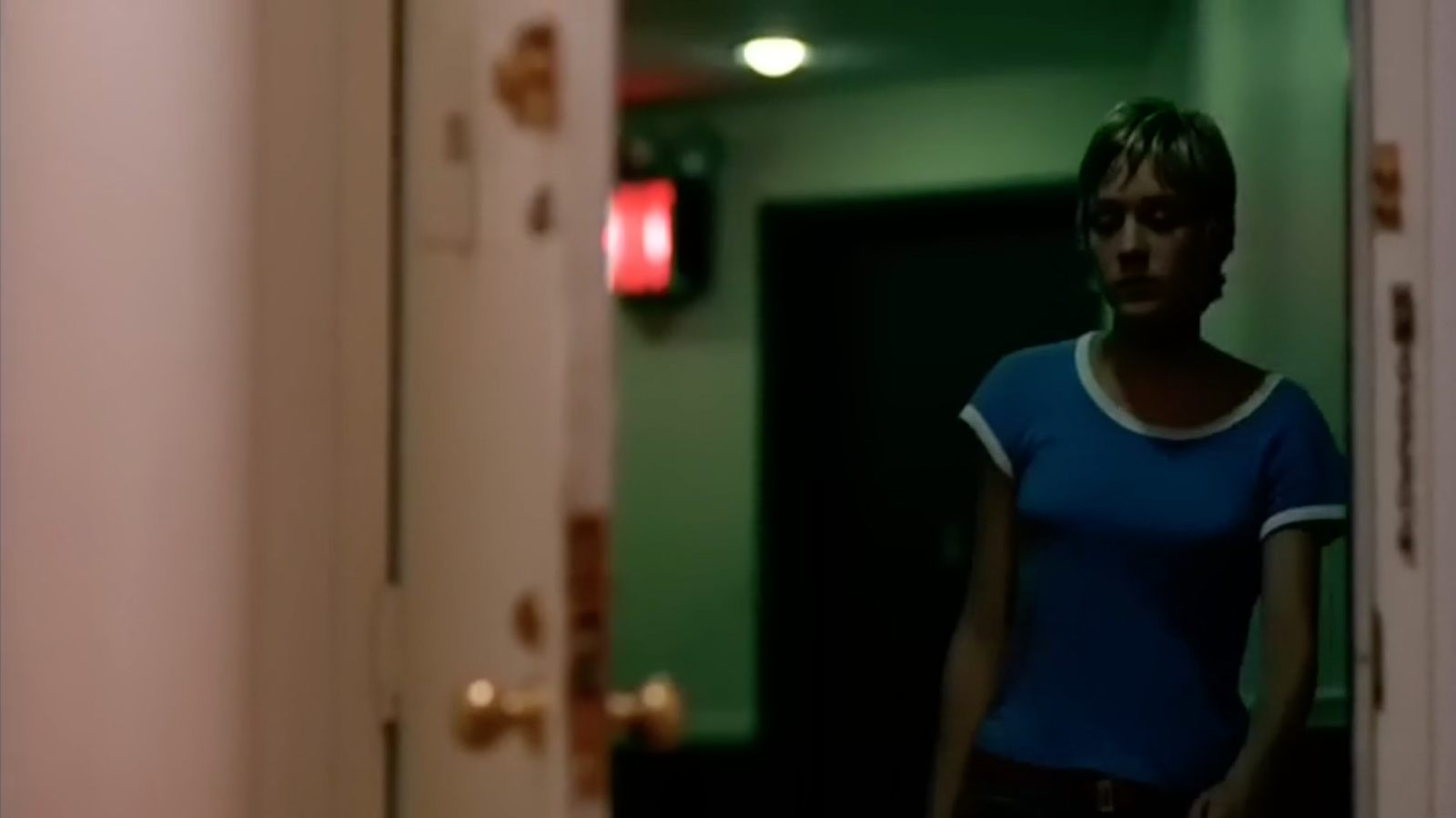 think of it as opening pandora's box - a lifestyle without any burden whatsoever is suddenly overrun with all of the evils of the world, repercussions for past actions suddenly catching up and threatening to destroy the world they all know.

interestingly, as much as the events within the film would potentially change the lives of the characters, the film itself would change the lives of nearly everyone involved in both positive and negative ways. as I've already mentioned, two of the stars died. harmony korine would go on to direct his first feature just two years later, and producers christine vachon and cary woods would go on to produce larger films that would be both critically and financially successful. larry clark did bully in 2001, but after ken park in 2002, his career dropped off and honestly, I'm not surprised.

for a more thorough examination of the events, check out caroline rothstein's article on narrative.ly - it's incredibly exhaustive and a fascinating read for all fans of the film and anyone interested in seeing how sudden notoriety can change the lives of everyday kids. 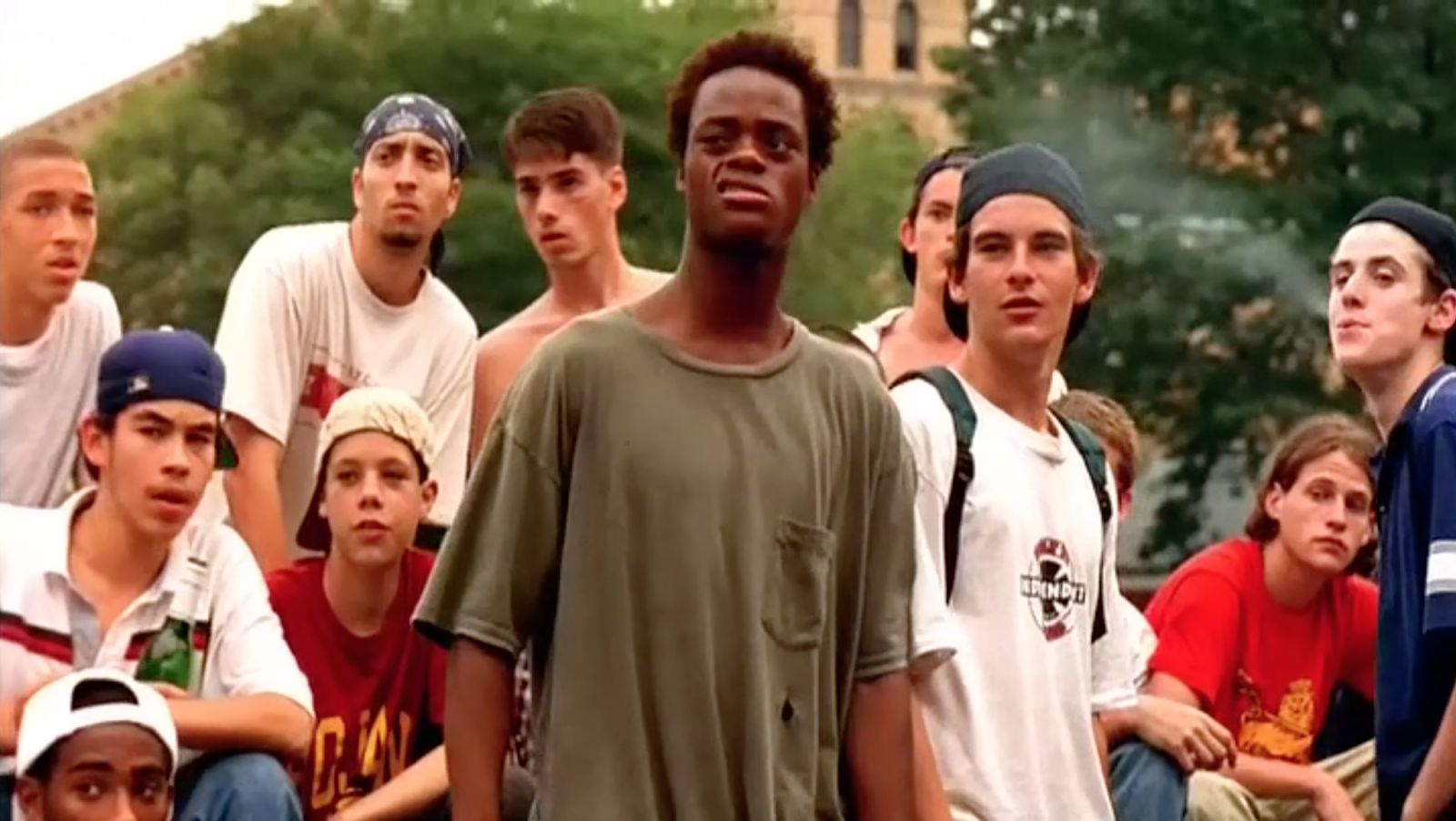 the parallels between the sudden success of the film and the sudden unleashing of the HIV virus within the film should not go unnoticed - in both cases, these young people were not, nor could they have been, prepared for what was to come. and although the film doesn't let us see the narrative fallout firsthand, the mixed blessings of reality have been more than dramatic enough - with the tragedies rendered even more tragic by our inability to press rewind.

as interesting as this film and the story behind it are, let's not forget the music - the whole soundtrack was done by lou barlow, generally known for his work in dinosaur jr. and sebadoh. it spawned one hit song, "natural one," by barlow as folk implosion - a track that remains great to this very day. there's a good variety of material to be found on the soundtrack, ranging from noisy rock to solo acoustic work, and it's definitely worth checking out.

despite all of the controversy and the tragedy that would befall too many of the cast members, the fact remains that kids in an essential portrait of new york city in the early to mid-1990's, a new york city that has been slowly eradicated over the last fifteen years. it's a different city now - whether that's a good thing or a bad thing, I'll let you decide.

but here it is, each and every harsh reality preserved for all time.

(buy a copy of the soundtrack.) 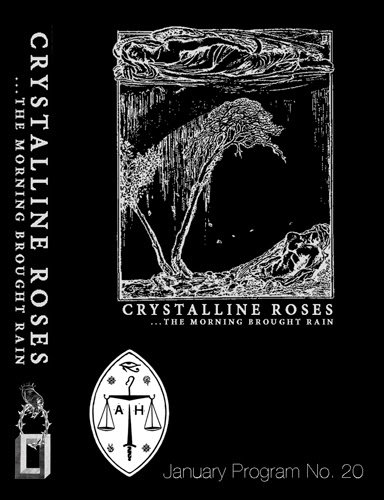 1. Got To Be Hope Somewhere
2. As The Water Turns To Sand
3. ...The Morning Brought Rain
4. Lost Rider
5. Satan Your Kingdom Must Come Down
6. It Surrounds Us All

much like the tempel ov blood tape on fallow field that I enjoyed, the latest release from western massachusetts' crystalline roses strikes many of the same chords, no pun intended.

musically, these two unrelated projects have a lot in common - both are composed of sparse acoustic guitar and not much else. there's a little more variety to crystalline roses' sound, but the melodies aren't quite as haunting as tempel ov blood's compositions. that said, anyone who enjoyed that tempel ov blood tape should enjoy this one as well.

frankly, it was a shock to hear this tape's sample during the january program. honestly, it just seemed so out-of-place...I've listened to a lot of ascetic house material, and there was no way I could've expected a release composed entirely of acoustic guitar and banjo.

that said, it's definitely been one of my favorite tapes of the batch. anthony pasquarosa, the man behind crystalline roses, has a whole bunch of other projects to explore, including heaven and earth magic.

and guess what - it's actually available online right now from mount analog, so grab one while you can. 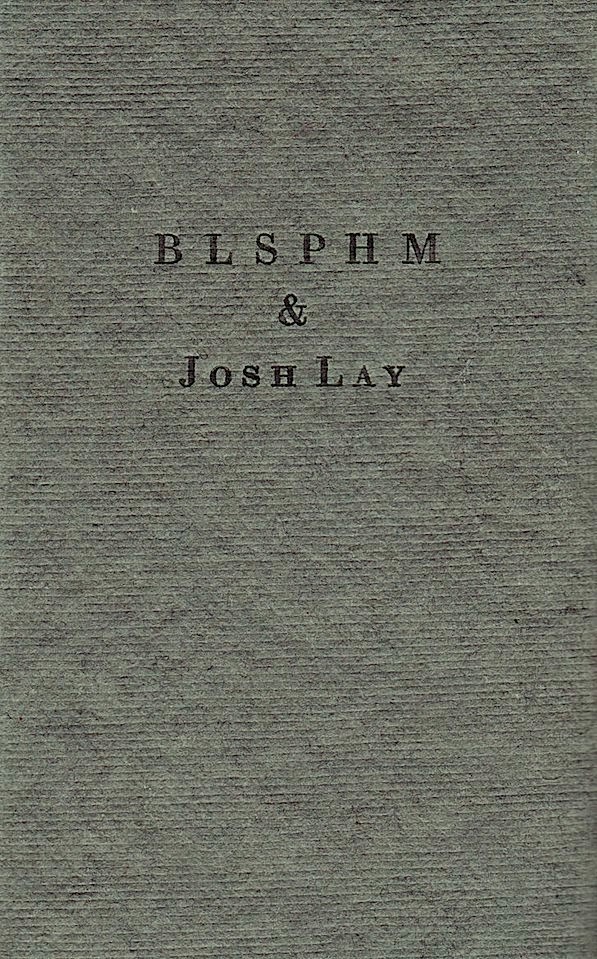 I originally ripped this tape and wrote this post before demian johnston posted this to the blsphm bandcamp, so instead of letting my writing go to waste, I'm still posting it, but the only link will be to the official stream.

from demian johnston's own dead accents comes his latest BLSPHM recording, a collaboration with noise artist josh lay, who also made an appearance on the séance compilation I posted a while back.

these two recordings arrive on a blank white tape with an anything-but-standard j-card. the title is letter-pressed into a gorgeous, very tactile paper stock. the insert is stapled to the j-card, its tattered edges beckoning you to look closer, to explore this inexplicable creation.

and it's limited to just forty hand-numbered copies.

it's a really great package and easily lends itself to the atmosphere created by the music, which is at turns violent, calming, and ominous. my only complaint: it's all over far too quickly. in fact, I'm already on listen number two, which is about to become listen number three.

based on this recording, it's easy to see that these two artists have at least the potential for a great deal more material between them, and I can only hope that it'll be realized sooner, not later.


(buy a copy from dead accents.)


(preview both tracks on bandcamp.) 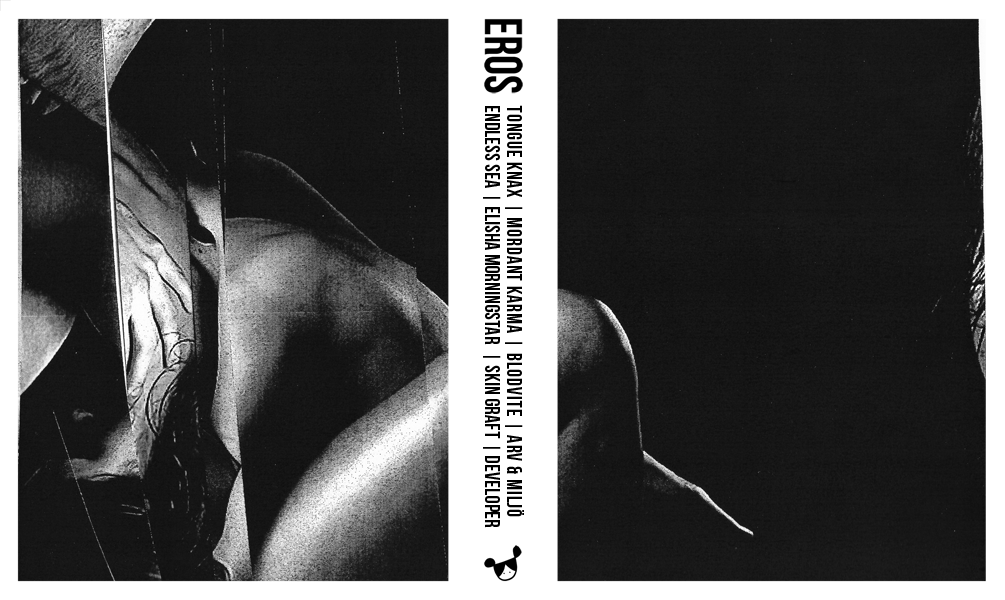 
well look what we have here...coming to us courtesy of a dear girl called wendy, eros is a perfectly curated and packaged compilation spanning four cassettes.

with tracks from blodvite, tongue knax, arv & miljö, and skin graft, this is one that no noise fan should pass up. and I had never heard of endless sea before, but their track here is absolutely fantastic.

this is easily the most lovingly packaged wendy release yet, with pro-printed cassettes and small cards featuring artist names and track titles. it's a high quality package and truly demonstrates the label's capabilities.

I doubt any distros still have copies in stock, so keep an eye on the discogs page and maybe one will show up...I can't imagine why anyone would want to get rid of this, but you never know.

as always, do your best to support all of these artists and this label in whatever ways possible. they're worth it.

1. Jute Gyte - For The Nightly Ascent Of The Hunter Orion Over A Forest Clearing
2. Jute Gyte - The Rib
3. Venowl - Snowbed

two of my favorite black metal acts have finally come together for a split of epic proportions. although venowl have done a few split releases, jute gyte's entire output has been almost exclusively solo releases (the notable exception being a single track on the svn okklt compilation).

just as I expected, this split brings out great tracks from both artists - and some of my favorite tracks, to be quite honest. jute gyte have already released a fantastic album this year and this one venowl track has me extremely excited for their next release.

and while I don't have a physical version of this release (yet), the full-color j-card looks stunning and I'm sure the complete package will be up to black horizons' usual standards.

you may remember black horizons as the label that released the amazing frozen in time compilation late last year. it ended up one one of my best-of lists for not only containing some amazing music, but for the stand-out packaging as well.

this tape should be going up for sale sometime later this week - don't pass up a chance to buy a copy of what will undoubtedly be one of the best splits of the year.


(keep an eye on black horizons.)


(stream the full split at black metal and brews.)