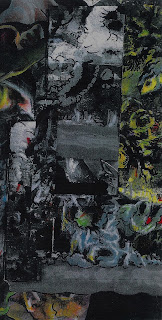 let's start june off with a bang of excellent harsh noise, courtesy of dan greenwood's diagram: a project. this is a triple c30 of cut-up source material that's been completely reshaped into something entirely new.

each tape is composed of material taken from other musicians and collaborations that greenwood then (I can only assume) rearranges, remixes, and destroys. the result is very glitchy noise with an occasional ambient drone thrown into the mix and I happen to think that it's all first-rate stuff.

prior to this set, I had never heard of diagram: a nor greenwood, but check out his blog - it's fascinating and features photos of the many machines he builds in order to perform the sounds featured here. there's also a section featuring his collage-based artwork and info on many of his releases. he's also collaborated with dominick fernow, and that's never a bad thing.

there's one copy for sale on discogs right now, so be sure to jump on it if you like what you hear. I've been hard-pressed to find any other rips on the net, but stop by greenwood's official soundcloud to hear samples from some of his other "guts" tapes that can be purchased for only $6 each, including shipping to the united states.

if you've actually checked any of the above links, it should go without saying that he's an artist worthy of your time and money, so do what you can to support dan greenwood and his art.