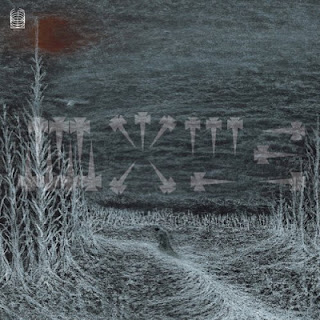 
first released by profound lore at the end of 2011, wold's "freermasonry" garnered too many scathing reviews to list here. although some were positive, most found it to be drastically inferior to the band's earlier output due to an increased reliance on repetitive waves of harsh noise and a sharp decrease in material that could be (even tangentially) viewed as black metal.

well, stephen o'malley's ideologic organ label has finally released "freermasonry" on vinyl, so let's take a minute to reexamine the record in a new light. also, there's a bonus track exclusive to this vinyl version, so that's why I'm posting it.

my girlfriend described this record as sounding like a haunted house, and I think that's pretty apt. while listening to this album I'm reminded of wandering through creaky, darkened corridors, strobe lights flashing, terrified of what lurks around the next corner. it's all very hypnotic, grating, and repetitive - this final quality being one of the most heavily-criticized aspects of the album upon its initial release.

but I think that's the point. we all know wold can mix things up if they want to, so the repetitive quality and same-ness of these tracks can't be an accident. and through the first few listens, it's understandable that this is all one may hear - but give it a few more listens, take it all in, and you'll soon notice subtle changes beneath the chaotic surface.

honestly, this album has a lot more in common with harsh noise wall than black metal, even noisy black metal, and I think that change contradicted many reviewers' preconceived notions of what the album would sound like. but instead of accepting it as something new, all people could focus on was the lack of black metal, the lack of riffs, the lack of something familiar.

wold have evolved their own sound and taken it in a drastically different direction that, understandably, turned a lot of people off. harsh noise and especially HNW can be extremely difficult for the uninitiated to hear, especially in the context of such a lengthy album. if you hated this album when it was first released, this vinyl version (and bonus track) probably won't do a lot to change your mind. but try to go into it with no genre-specific expectations and I think you'll find something with myriad redeeming qualities.

and if you, like me, were already a fan of the album, well, pick up a copy right now. the packaging is fantastic, the sound is perfect, and it'll make an excellent addition to any collection.

(buy a copy from experimedia.)