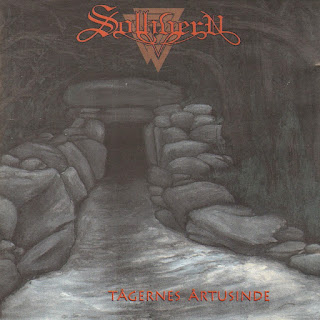 it's been a long time coming, but I finally obtained a copy of solhverv's first and only full-length, "tågernes årtusinde."

released in 1996 by euphonius records, a danish label, this album features studio versions of many of the tracks that were previously found on posh isolation's solhverv demos compilation, "94/96 sessions."

despite being close to twenty years old, this material (just like the demos compilation) still holds up remarkably well today. it all sounds great and any fan of old-school or modern black metal should be able to find something to like here.

as strange as it may seem, this album was only released on cd, so there's no obscure vinyl or cassette version to track down. but if you do want the cd, a couple are available on discogs. they're not exactly cheap as far as used cds go, but at least it's something.

sorry, but there's not a whole lot more for me to say about this one - just check out this hidden gem full of absolutely stellar old-school danish black metal and see for yourselves.