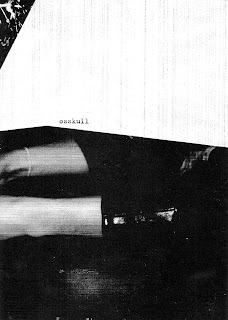 
despite having such an awkward name, italian label a dear girl called wendy is putting out some startlingly good noise music. with releases from john wiese, sewer election, alleypisser, and others under their belts, those in charge certainly have great taste.

with that said, they also released the debut recordings from osskull, also known as giovanni torregrossa, also known as ampconstrictor, last year. these two clear tapes come housed in a small but stylish reel-to-reel-style box with absolutely no information other than the artist, the name of the album, and the track titles - so the listener is essentially a blank canvas for the imminent auditory assault.

these thirty-three minutes and change are absolutely first-rate harsh noise that sounds very metallic, very electronic, and very cathartic. I don't really have much to say other than that I highly recommend picking this up. it's sold out from experimedia, so discogs is your best bet - it's a little more pricey but not by much, and it's still worth every penny.

if you like what you hear from osskull, be sure to check out the heinz hopf record that a dear girl called wendy released in 2011 over at the always-excellent bleak bliss. and enklav, who were featured on järtecknet's svenska dokument compilation, also have a full-length out on the label. up next, a dear girl called wendy will be releasing records from posh isolation mainstay LR and hospital productions veteran ahlzagailzehguh, both of which can be sampled on the label's soundcloud.

as always, do everything you can to pick up a physical copy of any release that you like. they may be difficult to track down but most are available on discogs, and for very fair prices. this is a great label that's only going to get stronger.