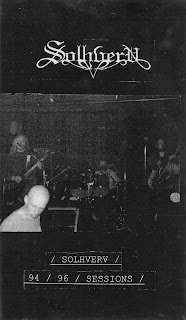 although there's not very much information on this one out there, here's an early posh isolation release compiling various recordings from solhverv - a now-defunct, punk-infused, raw black metal band from denmark - on two tapes housed in a slim, white vinyl case with two inserts.

from what I can tell, this double cassette release collects solhverv's demo on the first tape (with the tracks in a different order), and some rehearsals of tracks from that demo and their only proper full-length on the second tape.

there had been a version of this online a while ago, but all links seem to be dead now. needless to say, I hope you all enjoy it as much as I do. the first tape (tracks one - four) is great - fast and furious, bare-bones black metal with relatively good recording quality. the second tape (tracks five - ten), unfortunately, is obviously a rehearsal recording - the sound is low, it's filled with static, and the mastering is a mess - but that doesn't undermine the quality of the material nor the importance of these recordings.

if I didn't know any better, I could easily mistake this for a brand new, modern band using the most lo-fi recording techniques. to think that this was coming out of denmark as early as 1994 is staggering and it needs to be heard to be believed.

there's a digital version of their first and only full-length, tågernes årtusinde, available on amazon and itunes for less than nine dollars, so pick that up to (hopefully) support the band itself.

as for purchasing 94/96 sessions...well, this edition of 100 copies came out in 2009 and they're all long gone. your only chance to get ahold of one is discogs or ebay....but from what I've seen on ebay, it goes for a pretty penny. so keep an eye on discogs - as of this writing there two copies for sale.

this is definitely an essential recording for any and all black metal fans, especially if you're partial to the raw, fast, and lo-fi varieties.