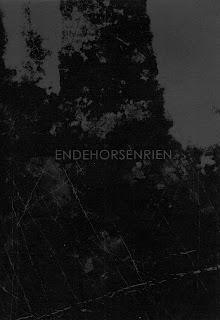 
I've said it before and I'll say it again - total black is the best. between his own releases and the distro items he obtains, brett has impeccable taste and his customer service is fantastic. every order ships out in a timely manner and arrives in great condition.

this tape, vomir's "en dehors, en rien," was released this year by NSN and went up for sale on total black a week or two ago. the black pro-printed tape comes in an oversized box with a hand-numbered insert and a black-on-black "HNW" patch, which alone is worth the price of admission. on the reverse side of the insert is a lengthy manifesto penned by romain perrot, the man behind vomir.

although this translation is admittedly not perfect, the manifesto reads as follows:

"the individual has no alternative but to refuse en masse contemporary life promoted and advocated. the right behavior in the noise and fall. a refusal to surrender to the handling, the socialization, and entertainment.

"the noisy wall does not promise to give meaning and value to the existence lived. the opaque sound, dull and continuous allows complete phenomenological reduction, a way against the existential interpenetration: disengages in pure, unadulterated bestial appeasement.

"the noisy wall is pro anomie, voluntary anomie. he questions the institution of any relationship, destroys everything that happens in a threatening rest.

"the noisy wall is a social disqualification. he recuse any notion of a group, community, organization, and admits the alternative postmodern hikokomori confinement. rejection and in the fold as an act - it is considered futuristic, dada, situ, anarchist, or straight edge - has become incapacitated. sagging actionism can not cope with the fake recovery, to prostitution, derivitive of our civilization.

"observed outside abject should be a last reminder of the human nonsense before epoche protest. everything and be everything becomes meaningless.

"the noisy wall is an unconsciousness time to live in the abyss and let it sink in now.

"the noisy wall is the physical loss of consciousness.

"the noisy wall is the constant practice of mental noise.

"the noisy wall is the active purity in non-representation.

"vigilant of last convulsions, adopt a new posture in the fold - or submission, leakage, or sag - the power to say "I've never been" in the desert created by deleting our surroundings. lost hope is freedom.

"in isolation from the noisy wall, the cell of nothingness becomes his shadow - impassive self murderer - and becomes the shadow of the man, unknowable, impersonal.

"in the noisy wall, aggravate your being aware and keep ignoring all the downturn required for the development of a pure indeterminacy that is forged in the oblivion of elements, binding the emotional and intellectual.

"the noisy wall, a dark spiritual ordeal, is the non-opposition between being and nothingness. a lullaby without end.

"the noisy wall spreads its occult virtues by the humming and buzzing of its hermetic formulas. it disintegrates and calls for the irrevocable decay."


well, that's certainly some food for thought. I used google translate and my own rudimentary french knowledge that I've somehow managed to retain since high school, so I apologize to any native french-speakers out there who may be offended and/or disappointed by my work above. that said, if anyone wants to submit a better translation, well, feel free to send it over.

regardless of the translation specifics, romain perrot is obviously a man who knows his philosophy - anomie, hikokomori, actionism - these terms were all new to me, but nonetheless provide an interesting look inside one man's motivations for creating such harsh soundscapes. with this type of sound being as nebulous and amorphous as it is, any insight into intention is always interesting.

as for purchasing a copy, total black's stock is sold out. the label, NSN, has a message on its website saying that mailorder has been put on hold due to a medical emergency. so....yeah. I don't know what else to tell you. try contacting romain via his own website, maybe he has a few copies for sale.

but definitely try to pick this one up - there are two epic twenty-minute slabs of harsh noise wall, a thought-provoking manifesto, and a patch, all in a great little package.