dunnock - a forest of shattered promise. 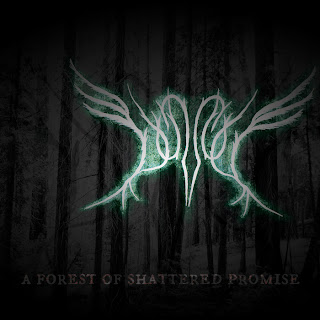 Dunnock - A Forest Of Shattered Promise

if the formatting above looks a little different, that's because this is the first album that has ever been submitted to the blog for my review. and since this one is available as a pay-what-you-like digital relase on bandcamp, I won't provide a direct download link.

with that preamble out of the way, here we have dunnock's "a forest of shattered promise," available now on acephale winter productions. both the label and band are brand new, having been formed (according to facebook, at least) in january of this year. in addition to the digital version, a cassette edition limited to fifty copies is also available.

stylistically, this is a mash-up of black metal, noise, and ambience, with some synth lines tucked in to add a little melody to the chaos. after two instrumental, mostly ambient tracks, the black metal aspect kicks in - pained screams and distorted guitars, all covered in a think layer of noise somewhat akin to luciform-era sutekh hexen.

after one more black metal track and another ambient track, "with raven feathers" comes to life immediately, and it's definitely a highlight. noisy black metal sections bookend what is mostly a melancholic, synth-driven piece. the next track, "I told you I was sick," is another long one that's split pretty evenly between black metal and ambient synth melodies.

for the most part it works really well but, honestly, it's not all as seamless as it should be - the transitions between styles don't always flow into one another, and at times it feels a little too disjointed.

that being said, for a debut from a band that has only been in existence for a couple of months, there's both a lot to like here and a lot of potential for the future. although this isn't an earth-shatteringly original record, any and all fans of noisy black metal should definitely check it out and keep an eye on both dunnock and acephale winter productions - future endeavors should be very promising.

(pay-what-you-like or buy the cassette on bandcamp.)

(note: if you're in a band or have a musical project that you think would fit in well on this blog, feel free to send a download or streaming link to imagerymetallic@gmail.com.)