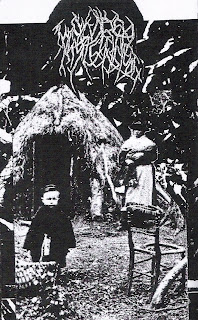 here's the second wóddréa mylenstede demo, also on legion blotan and also not available (digitally, at least) anywhere else online.

it has the same murky production of the first demo and other legion blotan releases, but while the first one was merely good, this second one blows it out of the water - the songwriting is much more mature and there are actually a couple of melodies and riffs buried under the static that really tie it together and make it feel like an album instead of a mere demo.

needless to say, I'm really looking forward to whatever these guys(?) put out next.

stop by legion blotan here to pick up a copy. they're located in the UK so shipping might be a little pricier than usual, but they've got a ton of great releases and need your support.