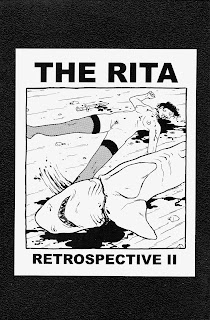 the second retrospective for sam mckinlay's the rita is exactly as brutal and unrelenting as you'd expect. after all, this is roughly four hours of the best harsh noise wall on the planet. and since it's sold out, how could I resist putting it up?

released by total black and limited to 100 copies, these are all long-gone, so congratulations to anyone who managed to snag a copy. inside the leather-textured box are four cassettes, a poster of the cover artwork, a booklet with info on each album, and reproductions of a few gig flyers. it's an absolutely incredible package, but what else would you expect from total black? if you somehow get a chance to pick one up second-hand, don't hesitate.

with that out of the way, on to the "music." I had only heard three of the six albums included here before and with the remaining albums going for astronomical prices on discogs and no rips anywhere online, I was excited to hear them for the first time.

and they don't disappoint.

I'd have to say that "koskimo house post" (tracks three - five) is my favorite album in the collection. it's so raw and jagged, but with such a deep, multilayered sound, that I hear new details every time I put it on. "village of holfen" (tracks eleven and twelve) and parisian dancing girls (tracks thirteen and fourteen) are highlights, as well.

do yourself a favor and buy something, anything, from total black. brett not only puts out fantastic releases, he also gets incredibly hard-to-find distro items that you'd be a fool to pass up.

and keep an eye out for total black's version of the rita's "the nylons of laura antonelli" eight-cassette box set that's coming soon. it's sure to be incredible.

(buy something from total back.)