social junk - give up. 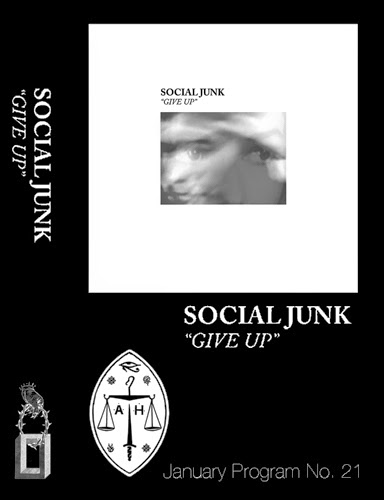 Social Junk - Give Up

here's one more from the january program...and maybe the last one I'll post, too. the others that I have, they don't totally fit in with the rest of this blog, but maybe I'll put one or two up if I'm desperate for content...

anyway, social junk appear to have a pretty lengthy discography which I'm ashamed to say that I'm completely unfamiliar with. even after perusing the shadiest of russian torrent sites, I've been unable to track down any full-length rips of their earlier material...so if any of you have any of said material, I'd love to take a listen.

nevertheless, let's consider this release simply on it's own merits: it's noise, it's ambience, it's post-punk, it's anything and everything, often all at once. and while the specific sounds can vary wildly from track to track, it's a very cohesive release on the whole and I've been really enjoying it ever since it showed up in my mailbox.

interestingly, it appears that this release was originally offered up for free from the band a few years ago, but like most mediafire links, it has since gone dead. and the hard copy is sold out everywhere - even mount analog is out of copies.

so here it is. I hope you all enjoy it as much as I do.